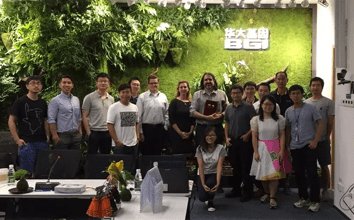 On May 8, 2017, the CNGB and the Neurosurgery Center of Beijing Tian Tan Hospital joined the CBTTC which also officially announced that the CNGB became a new satellite member. So far, the CBTTC already has 15 members from Europe, Asia, and America respectively. Countries will work together to advance children’s brain tumor disease research and open a new chapter in children’s health.

The CNGB will establish the China Children`s Brain Tumor Disease Data Center with the CBTTC to help the effective data accumulation of children`s brain tumor disease in China. This will help researchers better master, share, and analyze children`s cancer data. The CNGB calls for more Chinese hospitals to join the program, share the research results, promote the rapid development of life sciences, work hard to solve the globally shared health challenges, and make active contributions to improve human well-being. The CNGB relies on its own large samples and big data platform to accelerate the scientific research and clinical transformation of children`s brain tumors and other children`s tumors, help to eliminate diseases, and commit to realize “owned by all, shared by all, and completed by all” of the genetic resources.