Biologists propose to sequence the DNA of all life on Earth 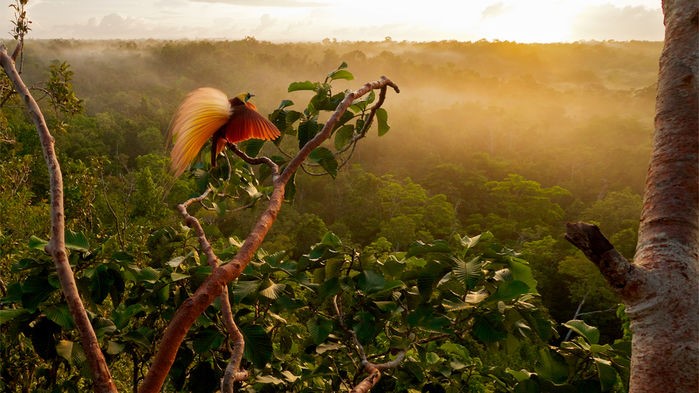 Can biologists sequence the genomes of all the plants and the animals in the world, including this greater bird of paradise in Indonesia?

WASHINGTON, D.C.—When it comes to genome sequencing, visionaries like to throw around big numbers: There’s the UK Biobank, for example, which promises to decipher the genomes of 500,000 individuals, or Iceland’s effort to study the genomes of its entire human population. Yesterday, at a meeting here organized by the Smithsonian Initiative on Biodiversity Genomics and the Shenzhen, China–based sequencing powerhouse BGI, a small group of researchers upped the ante even more, announcing their intent to, eventually, sequence “all life on Earth.”

Their plan, which does not yet have funding dedicated to it specifically but could cost at least several billions of dollars, has been dubbed the Earth BioGenome Project (EBP). Harris Lewin, an evolutionary genomicist at the University of California, Davis, who is part of the group that came up with this vision 2 years ago, says the EBP would take a first step toward its audacious goal by focusing on eukaryotes—the group of organisms that includes all plants, animals, and single-celled organisms such as amoebas.

That strategy, and the EBP’s overall concept, found a receptive audience at BioGenomics2017, a gathering this week of conservationists, evolutionary biologists, systematists, and other biologists interested in applying genomics to their work. “This is a grand idea,” says Oliver Ryder, a conservation biologist at the San Diego Zoo Institute for Conservation Research in California. “If we really want to understand how life evolved, genome biology is going to be part of that.”

Ryder and others drew parallels between the EBP and the Human Genome Project, which began as an ambitious, controversial, and, at the time, technically impossible proposal more than 30 years ago. That earlier effort eventually led not only to the sequencing of the first human genome, but also to entirely new DNA technologies that are at the center of many medical frontiers and the basis for a $20 billion industry. “People have learned from the human genome experience that [sequencing] is a tremendous advance in biology,” Lewin says.

Many details about the EBP are still being worked out. But as currently proposed, the first step would be to sequence in great detail the DNA of a member of each eukaryotic family (about 9000 in all) to create reference genomes on par or better than the reference human genome. Next would come sequencing to a lesser degree a species from each of the 150,000 to 200,000 genera. Finally, EBP participants would get rough genomes of the 1.5 million remaining known eukaryotic species. These lower resolution genomes could be improved as needed by comparing them with the family references or by doing more sequencing, says EBP co-organizer Gene Robinson, a behavioral genomics researcher and director of the Carl R. Woese Institute for Genomic Biology at the University of Illinois in Urbana.

In this representation of the tree of life, there are very few completed genomes (red lines in inner rim) among named eukaryotes (green), but many more among bacteria (blue) and archaea (purple). Among the millions of eukaryotic species, there are even relatively few lower resolution genome sequences (blue, light and dark gray).

The entire eukaryotic effort would likely cost about the same as it did to sequence that first human genome, estimate Lewin, Robinson, and EBP co-organizer John Kress, an evolutionary biologist at the Smithsonian National Museum of Natural History here. It took about $2.7 billion to read and order the 3 billion bases composing the human genome, about $4.8 billion in today’s dollars. With a comparable amount of support, the EBP’s eukaryotic work might be done in a decade, its organizers suggest.

Such optimism arises from ever-decreasing DNA sequencing costs—one meeting presenter from Complete Genomics, based in Mountain View, California, says his company plans to be able to roughly sequence whole eukaryotic genomes for about $100 within a year—and improvements in sequencing technology that make possible higher quality genomes, at reasonable prices. “It became apparent to me that at a certain point, it would be possible to sequence all life on Earth,” Lewin says.

Although some may find the multibillion-dollar price tag hard to justify for researchers not studying humans, the fundamentals of matter, or the mysteries of the universe, the EBP has a head start, thanks to the work of several research communities pursuing their own ambitious sequencing projects. These include the Genome 10K Project, which seeks to sequence 10,000 vertebrate genomes, one from each genus; i5K, an effort to decipher 5000 arthropods; and B10K, which expects to generate genomes for all 10,500 bird species. The EBP would help coordinate, compile, and perhaps fund these efforts. “The [EBP] concept is a community of communities,” Lewin says.

There are also sequencing commitments from giants in the genomics field, such as China’s BGI, and the Wellcome Trust Sanger Institute in the United Kingdom. But at a planning meeting this week, it became clear that significant challenges await the EBP, even beyond funding. Although researchers from Brazil, China, and the United Kingdom said their nations are eager to participate in some way, the 20 people in attendance emphasized the need for the effort to be more international, with developing countries, particularly those with high biodiversity, helping shape the project’s final form. They proposed that the EBP could help develop sequencing and other technological experts and capabilities in those regions. The Global Genome Biodiversity Network, which is compiling lists and images of specimens at museums and other biorepositories around the world, could supply much of the DNA needed, but even broader participation is important, says Thomas Gilbert, an evolutionary biologist at the Natural History Museum of Denmark in Copenhagen.

The planning group also stressed the need to develop standards to ensure high-quality genome sequences and to preserve associated information for each organism sequenced, such as where it was collected and what it looked like. Getting DNA samples from the wild may ultimately be the biggest challenge—and the biggest cost, several people noted. Not all museum specimens yield DNA preserved well enough for high-quality genomes. Even recently collected and frozen plant and animal specimens are not always handled correctly for preserving their DNA, says Guojie Zhang, an evolutionary biologist at BGI and the University of Copenhagen. And the lack of standards could undermine the project’s ultimate utility, notes Erich Jarvis, a neurobiologist at The Rockefeller University in New York City: “We could spend money on an effort for all species on the planet, but we could generate a lot of crap.”

But Lewin is optimistic that won’t happen. After he outlined the EBP in the closing talk at BioGenomics2017, he was surrounded by researchers eager to know what they could do to help. “It’s good to try to bring together the tribes,” says Jose Lopez, a biologist from Nova Southeastern University in Fort Lauderdale, Florida, whose “tribe” has mounted “GIGA,” a project to sequence 7000 marine invertebrates. “It’s a big endeavor. We need lots of expertise and lots of people who can contribute.”